As Zhang Lu’s book Inside China’s Automobile Factories got published in German in March 2018, we collect material on the book, on auto workers’ protests in China and further texts written by the author. 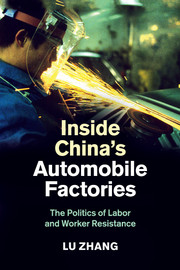 We document the English translation of the German editors preface written for the German version of Inside China’s Automobile Factories.

This is a book review and an interview with the author by Ralf Ruckus published by Sozial.Geschichte Online in 2016: Zhang Lu on exploitation and workers’ struggle in China’s auto industry

Another book review by Deng Yunxue was published by the Global Labour Journal in 2018: On “Inside China’s Automobile Factories”

On the struggles of auto workers in China

A report by Ralf Ruckus on the struggle of temporary agency workers at the automobile joint venture FAW-Volkswagen in Changchun appeared on gongchao.org in 2017: “The Germans don’t care. So it’s on us to fight!”

In early 2018, gongchao.org published an update by Xia Nü on the struggle at FAW-Volkswagen: Has the Workers’ Protest at FAW-VW Ended?

The strike at Honda in Foshan, Guangdong, that started in May 2010 and triggered a strike wave in China’s auto factories was described and analyzed by Zhang Lu for Labor Notes: Do spreading auto strikes mean hope for a workers’ movement in China?

Another account of the 2010 strike wave was written by Lance Carter and published by Insurgent Notes: Auto Industry Strikes in China

A longer analysis by Wang Kan appeared in Sozial.Geschichte Online in 2011: Collective Awakening and Action of Chinese Workers – The 2010 Auto Workers’ Strike and its Effects

Zhang Lu and Beverly Silver wrote an article on the global significance of labor unrest in China (2010, PDF): China as an Emerging Epicenter of World Labor Unrest

In Inside China’s Automobile Factories, Zhang Lu explores the current conditions, subjectivity, and collective actions of autoworkers in the world’s largest and fastest-growing automobile manufacturing nation. Based on years of fieldwork and extensive interviews conducted at seven large auto factories in various regions of China, Zhang provides an inside look at the daily factory life of autoworkers and a deeper understanding of the roots of rising labor unrest in the auto industry. Combining original empirical data and sophisticated analysis that moves from the shop floor to national political economy and global industry dynamics, the book develops a multilayered framework for understanding how labor relations in the auto industry and broader social economy can be expected to develop in China in the coming decades.

The English original of the book was published by Cambridge University Press, the German edition by Mandelbaum Verlag.